For the last couple of days, I attended the Mountain Plains Bookseller Association Fall Discovery Show in Denver. The various regional associations divide the United States and the Mountain Plains area is one of the smallest in the country. I went to this event many years ago and it was fun to return to it again. I was like a kid in a candy store.

While not as massive as Book Expo event, this trade show brings many booksellers from the western states together to see old friends and learn about new products. The exhibit hall was mostly books but also included related products. Publishers were giving away Advanced Reading Copies (ARCs) of books which will be in 2015. I enjoyed walking around and meeting new people and learning about forthcoming books from different publishers.

One of the interesting non-book products was Rolli Stamps from Funny Bone Muse. Check out this little video:

At another exhibitor, I learned about Woker, which is a word card game. I'm not much of a game player but with coaching from Lisa Teore, the creator of the game, I managed to play one hand of Woker—which to me is similar to Scrabble yet with cards. Booksellers throughout the country carry Woker in their stores. Lisa mentioned that the local Tattered Cover carries this game. 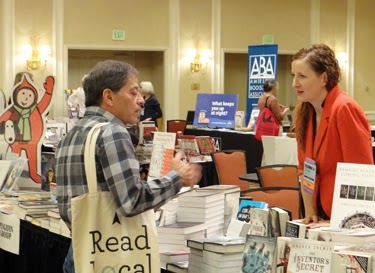 I'm always interested to learn what publishers are doing to promote and capture attention for their forthcoming books. At the Penguin Random House booth, I picked up an Advanced Reading Copy of The Girl on the Train by Paula Hawkins. This book will not release in the stores until January 2015. The ARC came wrapped in a cover sleeve with a window which said, “You'll never look out the window the same way again.” It captured my attention and I carried it home to try out this novel.

Friday night, I attended the Author Banquet, which featured four authors from well-known publishers. The room only held 150 booksellers and others from the show so this particular ticket was a “hot” item. Every chair had the four books from each of these authors—and each of these books were signed. Two of these books were nonfiction and two were fiction. After the meal, each author spoke for a few minutes giving background about their book and hopefully intriguing the publishing professionals in the room to buy and hand-sell their books in the days ahead.

Each of the four speakers were entertaining and interesting in their presentations. One of the four writers had not done his research about what booksellers think about Amazon. This author opened his presentation with a joke about Amazon which fell completely flat in the room with booksellers looking at each other wondering if they should groan or politely chuckle.

Whatever you think about Amazon, they have forever changed the business of selling books. The Author Banquet was filled with booksellers from the west and many of them have strong negative feelings about Amazon. To even mention Amazon during a presentation revealed how little this author understood booksellers.

I gained a tremendous amount of new friends and learning from a couple of days at this trade show. If you get the opportunity to attend such an event, I encourage you to seize it.


GoodReads Giveaways on My Books

One of the ways I'm spreading the word about my new books is to give some copies away on GoodReads. Here's where the giveaways are located on GoodReads. Please tell others and sign up yourself to possibly get one of the copies.

First the updated edition of Jumpstart Your Publishing Dreams:

Second my biography of Billy Graham which releases a few days before Mr. Graham turns 96:


I hope you will check it out, enter yourself and pass it on to your friends.