Editor's note: Today and tomorrow, I'm honored to introduce you to Brad Phillips, the president of Phillips Media Relations, a media and presentation training firm with offices in New York City and Washington, D.C. I was fascinated with the insights in these two excerpts from his new book, The Media Training Bible.

Many of the executives we work with are terrified of social media. They’ve either experienced the dark side of it personally or heard horror stories from their industry peers: tales of vicious comments on an influential blogger’s website; incorrect and badly damaging rumors on Twitter; or an embarrassing, secretly filmed video uploaded onto YouTube.

Those potential hazards are real. But executives tend to focus disproportionately on the downsides of social media and not nearly enough on the potential upsides. Their focus on the risks leads them to adopt a “head in sand” strategy of neglecting social media, which rarely works, at least in the long-term. 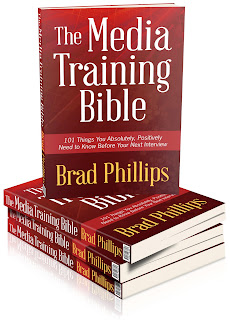 Social media—which include blogs, social networks, and video-sharing sites—offer today’s communicators a tremendous advantage over their predecessors.
Think back for a moment to the turn of the 21st century, when journalists still dominated as the primary gatekeepers of information. If a company wanted media attention, it would send a press release to a few reporters and wait passively as the reporters decided whether or not to cover the story. Even if the company’s work was covered, there was no guarantee of the story being favorable. Companies were at the mercy of the press.
To be sure, those reporters remain critical allies today. Positive stories by the media still bestow valuable third-party credibility onto you, while negative stories can diminish your reputation.
But the traditional media’s influence is waning. Social media have flattened the playing field, allowing companies to disseminate the information they want, to whomever they want, whenever and however they want. There’s no longer a need to wait for a journalist to file a story—if companies want their audiences to know something, they can just post it to their blog, Facebook page, or Twitter feed.
If you’re still deciding whether or not to maintain a social media presence, the answer should almost surely be yes. Your audiences aren’t waiting for you to interact—they’re already talking about you. Companies that engage their audiences can build positive relationships, create a reservoir of goodwill to tap into when a crisis strikes, and help prevent false rumors from spreading before they take deep root.
If you work for a company, your social networks offer you free market research that used to cost many thousands of dollars. If you work for an advocacy group, your networks tell you which appeals are most likely to spur donations before you invest in a major campaign. If you work for a government agency, your social networks will let you know what public misperceptions you need to clear up.
Journalists are also turning to social media in droves to learn more about you. If you’re not managing your reputation where your audiences are, you’re nowhere—or worse.
Social Media by the Numbers

Brad Phillips is the author of the new book TheMedia Training Bible: 101 Things You Absolutely, Positively Need to Know BeforeYour Next Interview. He blogs at www.MrMediaTraining.com.