When writers see that I have over 21,000 followers on Twitter, they wonder how I got there. It is not complicated but like other things in the writing world, to be successful it will take disciplined and consistent effort. I'm going to show you the direction to go with your own Twitter account.
The best way to get more followers is to follow other people. It sounds simple right? People follow those people who follow them. It's one of the key principles of twitter.
So, you just follow thousands of people and gain your followers? No, it is not that simple. Twitter controls the number of people you can follow during a 24-hour period. The exact number isn't clear but I confess that I've maxed it out several times.
Here's how to find who to follow. Think of your brand and topic. Who is the leading person or persons active on Twitter? You want to find someone who has thousands of followers.
Go to www.twellow.com. This site is like the yellow pages for Twitter and tracks many of the people who have the highest number of followers. The search tool allows you to search for a specific subject. For example, if your area of speciality is parenting. You want to follow the people on twitter with the largest following in this specialty. Often you will find one or two people who have substantially more followers than others in the area. Focus on these few leaders and make note of their twitter names. You will need them in a few minutes with another free tool for Twitter.
First, are you logged on to your Twitter account? Have one of the tabs in your browser open to your twitter account and be logged on to your Twitter account. Now open a new tab in your brower and go to a site called Refollow.com. While I have gotten a lot of use from this site, it has no instructions or help menu. You have to either spend time playing with it or learn how to use it from someone else (which is my purpose in writing this entry). 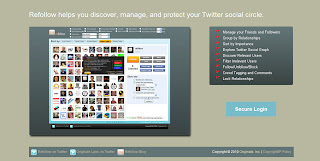 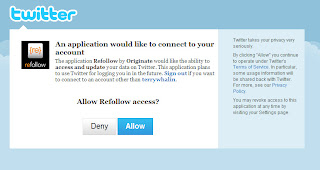 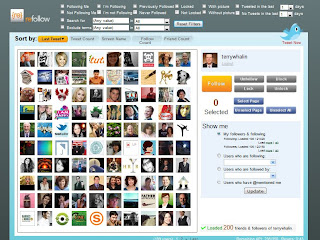 Notice my own profile photo and which shows I'm logged on my own Twitter account? I use Refollow for several different functions. First, I want to follow everyone who is following me (which is a general principle in the twitter community). Focus on the little boxes on the top of the page. I want to check the box which says, "Following Me." Then in the next column, I want to check the box that says, "I'm not Following." I have Refollow "load" my followers. Then all of the people who are following me and I'm not following, will load into the program. I select them, the follow them.
Next I want to Unfollow the people who are not following me. I load all of my followers into the memory of the program and check the boxes at the top of the page which say, "Not Following Me." Then in the next column, "I'm Following." It will show you all of the people who are not following
you. I select all of those followers. It may be several pages of people (depending on when I do it), then I select the Unfollow button--and the program automatically removes everyone of those people.
Finally, I want to proactively follow new
people who are interested in the topic of my tweets. I use my list of people that I made from Twellow. For the top buttons, I want to check these boxes:

Not Following Me
I'm not Following
Never Followed
Not Locked
With Picture (shows an active Twitter user)
Tweeted in the last 3 days (again someone active on Twitter)
In the center area of the screen, I want to select the button, "Users who are following:" then notice the blank spot. Put the user name you found from Twellow into that spot and click the update button. Refollow will load about 100 of the person's followers. Often I will load several hundred of this users followers into the program. Next I select those names using the "select page" button. It adds little check marks to every name selected and totals the names. When I get several hundred, then I click the large yellow "Follow" button. As it performs the function, you will see the followers added to your Twitter account.
At this point I am finished with Refollow and log out of the program and close that tab. About two or three days later, I return to Refollow. I follow the people who are following me and I'm not following. Then I unfollow the people who I'm following and are not following me. Finally I select a user who is a leader in the area where I tweet, load their users into the program and follow several hundred new followers.
There are several cautions using this program. If you are too aggressive and follow too many people and unfollow too many people, then Twitter will notice and possibly suspend your account (which you do not want to happen). Also Twitter controls how many new people you can follow during a 24 hour period. I've maxed out my new followers several times. If that happens, you wait for 24 hours, then you are able to follow new people.
This tool is not a quick fix or way to instantly gain thousands of followers. You are intentionally adding several hundred followers at a time, then returning a couple of days later to see if they have started following your tweets. Through consistent use of these programs, you can increase your followers.
In these last two entries for The Writing Life, I've shown you a proactive way to increase your effectiveness of Twitter. This tool helps you relate to new people in a different way. I like what John Kremer has regularly said about book selling: it is building relationships. You are building relationships in a different way through the consistent use of Twitter.

Thank you for the Twitter How-To! I have wanted to devote time getting to know Twitter, but there is always something more urgent to do. But, you delivered this handy reference straight to my inbox. I appreciate you!

Nice. Thanks for your ongoing well-written words and advice. I'm blessed.

Thank you for all of this great information in such a concise format. I haven't been able to join Twitter yet, but when I do, your post will definitely save me a lot of research time and trouble!

Hi Terry, I followed you because you followed me... nice to meet you. Tell us how you track or keep track of all those you're following... it would take what, a month to read just one day's worth... well a week anyway, so how does it work with you? How do you build relationships with 20,000+ people?

Twitter has been my companion for a long time, and I’m glad that I used Wizugo for my Twitter account marketing. WizUgo [com] has rendered such amazing services that no other marketing tool can provide. Wizugo boosted my followers more than 60% in just a couple of days; it took my Twitter account to another level.