It's the stuff of self-publishing legends and the hope of each self-published author--yet it is one in millions. I'm referring to The Christmas Box by Richard Paul Evans. He tells a bit of his story in the biography page from his personal website, "When Richard Paul Evans wrote the #1 best-seller, The Christmas Box, he never intended on becoming an internationally known author. Officially, he was an advertising executive, an award-winning clay animator for the American and Japanese markets, candidate for state legislature and most importantly, husband and father. The Christmas Box was written as an expression of love for his (then) two daughters. Though he often told them how much he loved them, he wanted to express his love in a way that would be timeless. In 1993, Evans reproduced 20 copies of the final story and gave them to his closest relatives and friends as Christmas presents. In the month following, those 20 copies were passed around more than 160 times, and soon word spread so widely that bookstores began calling his home with orders for it." 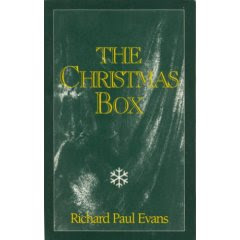 Many writers who want to follow in Evans footsteps miss the fact that his manuscript was excellent and compelling. It had that word-of-mouth pass along quality that publishers are looking for from writers--yet rarely finding. Ultimately Evans sold the hardcover rights to Simon and Schuster for a $4.25 million dollar advance. He gives more of the results of this sale on his personal site saying, "His quiet story of parental love and the true meaning of Christmas made history when it became simultaneously the #1 hardcover and paperback book in the nation. Since then, more than eight million copies of The Christmas Box have been printed. The Emmy award-winning CBS television movie based on The Christmas Box starred Maureen O'Hara and Richard Thomas. Two more of Evans's books were produced by Hallmark and starred such well-known actors as James Earl Jones, Vanessa Redgrave, Naomi Watts, Mary McDonough and Academy award winner Ellen Burstyn. He has since written 10 consecutive New York Times bestsellers and is one of the few authors in history to have hit both the fiction and non-fiction bestseller lists."

Many years ago I met Evans at the Mountain and Plains Booksellers Association Trade Show in Denver. He autographed a copy of the paperback version of The Christmas Box which I have on my bookshelf (third printing, 1994). A little over a week ago at the Florida Writers Association in Orlando, Evans was the keynote speaker and I saw him briefly again. He donated a copy of The Christmas Box paperback to each person at the conference. His message to the conference was inspirational and encouraging. I appreciated the opportunity to see Evans again and hear him speak.

Let me finish this entry pointing to a fascinating article from Carolyn Campbell at Writing-World.com about Evans. Buried in this article is something that many fiction authors miss--but they should be thinking about for the promotion of their novels. Evans said, "Along the way, I discovered it's very difficult to get national media attention for fiction. Talk show hosts feel that fiction isn't intriguing or relevant enough for them to sit down and talk about it. Eighty percent of the books featured on talk shows are nonfiction, where they can talk about relationships or dads or near-death experiences. They feel that asking a fiction author to "tell me what your book is about," doesn't make a good interview. Luckily, I had a story behind my book (his mother losing a child to death) that made it interesting to the press."

For fiction authors, it is your nonfiction topic which you are going to be talking about in your interviews with the media and to promote the book. It is not your novel. Through writing your book, you've become an expert in this particular topic and need to emphasize it to catch media attention.

There are valuable lessons from Evans story for every author--whether you write fiction or nonfiction. First, the entire publishing process is based on having an excellent, compelling manuscript. Second, you need to be wise about how you handle the business details like your book contract. Finally, be aware for the promotion that you will need to be the expert in a nonfiction topic to get media attention.

I think that makes sense. With the exception of the rare book that is so hilariously funny that people have to read it for the enjoyment of it, or the fantasy book that takes place in a very unusual setting, one entertaining book is about like another. Books allow the reader to experience things without the risk of actually experiencing it. The story is interesting and entertaining, but what people really want to know is now that I have read this, how should I live?