How to Handle Rejection 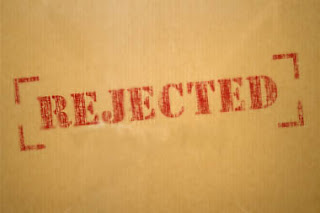 No one likes to hear the word “no” or “no, thank you.” Yet it is firmly a part of the publishing community. It's been a while since I've written about rejection. From time to time, I believe it is good to return to it and includes lessons for every active writer.

Notice I wrote that little word “active?” Some people call themselves writers (which is good in my view) yet haven't been recently rejected because they are not sending out their material. Getting rejected is a part of the writing life.

If you want to get published in magazines, then you need to be studying the magazines and regularly pitching ideas to them (a query), then getting feedback from the editor (hopefully an assignment) and turn in your well-written article on the deadline. I encourage you to write for print magazines because it will help you as a writer in a number of areas of your writing life. If you write nonfiction, it is good to write for magazines and if you write fiction, it is good to write for magazines. In general, print magazines have a higher standard of excellence than online publications so I'm talking about print publications.

It is the same constant action of pitching your idea which counts on the book side of publishing. Several years ago I was a fiction acquisitions editor then a literary agent (all former roles for me now) but I learned a great deal about the rejection process from my work in these areas.

Manuscripts and proposals and query letters come in all shapes and sizes. When I was acquiring fiction, I was consistently work on my stack of submissions so people hear from me. It’s often not the answer they want to hear. To receive a yes response takes time in publishing and involves a lot of consensus building within the publishing house.

The “no” response can often be determined quickly. If you send in a query about a 25,000 word novel or a children’s book, then you are headed for rejection. When I was working for Howard, they did not do children’s books and I was the fiction acquisitions editor. We were not considering youth books or young adult. Instead the focus was on six to eight adult length novels (generally 80,000 to 100,000 words). So…if your novel is 56,000 words, it’s too short for serious consideration—no matter how well it is written.

Now the writing—that’s another consideration. You would be shocked at the telling manuscripts which don’t jump into the plot. Or they meander around the story line before they jump into it. Editors and agents are looking for excellent storytelling and a plot that can’t be put down. I understand it’s a high goal—but there are many manuscripts and only a few manuscripts will be selected and even fewer ultimately contracted.

Because I am someone who also writes and loves writing books and magazine articles, it’s painful to send these rejection letters. I know people have poured their heart and dreams into these submissions. I’ve also learned the hard way if I add anything personal, I will get it revised and resubmitted to me—and often again rejected. Instead, I resorted to the standard editor response—the dreaded form letter. I don’t like receiving them and I don’t like sending them—but they come with the business.

Whether the writer likes the response or not is not the issue. It’s important to me that they have received a response. Often submissions go into a black hole and you never know if the editor received it, processed it or anything. With each submission, I know they have been read, carefully considered and rendered a decision. In some ways, I hope it softens the pain of rejection.

Finally I want to give you three key points to handle rejection:

1. Understand it. Every active writer is rejected. While you have put your best writing out into the marketplace, it is not personal. The editor or agent is looking for something specific and you are trying to make the right connection with your submission. If it was rejected, then the right connection didn't happen. It is part of the business.

2. Learn from it. You may or may not receive any feedback with the submission but you can still continue working on an excellent submission. If you don't know how to craft a query letter, then learn that skill. Get in a critique group to have a safe group of trusted writers to bounce ideas. If you don't know how to create an excellent proposal then learn this skill as you are sending out your ideas.

3. Persist and keep knocking on new doors. While you may have your mind and heart set on a particular magazine or book publisher or agent, the world is large. There are many places and ways to get your material out into the marketplace. Keep growing and looking for new opportunities.

Every writer can gain the skill of properly handling rejection. I know you can do it.

Thank you. I joined Fanstory.com to hone my writing skills. I submitted two poems. I received a lot of nice reviews (I am focusing on those.) However, the one review was exacting and brutal. My first response is to defend myself and be nasty but I sucked up my pride and did not respond with hate mail. I am sure this is one of life's lessons and I am trying to learn.