This past weekend, I was reading Twitter Means Business, How Microblogging Can Help Or Hurt Your Company by Julio Ojeda-Zapata. I gave the book a Five Star Amazon review.

As I read the book, it hit me that the problem that many people have with Twitter is the name. If you are struggling with this area, then I encourage you to move past the name and use it. You can download the free Ebook, Mastering Twitter in 10 Minutes or Less (use this link) and begin right away. The name of the social media tool, Twitter, sounds like a 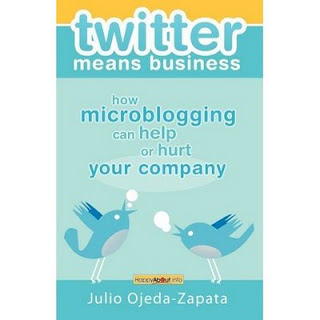 complete waste of time from the first blush. It's not. Millions of people are using Twitter 24/7 for business.

With fascinating detail, Julio Ojeda-Zapata in Twitter Means Business has created a page-turner with plenty of creative fodder to teach readers about the business uses of Twitter. As he explains on page 5, "Twitter means business. That is, a service initially meant for informal communication between individuals has recently become the darling of businesses, large and small. Such firms are finding the "Twitterverse" a fine place to keep an eye on their brands, and what is said about them."

If you wonder about the numbers, just look on page 9: "according to site-analytics service Compete, Twitter saw more than 2.5 million unique visitors as of August 2008, a 443 percent increase over the previous year."

Throughout the book, Ojeda-Zapata captures the various applications in "Twitter Lessons" which are scattered throughout the book. With little effort, the reader will easily be able to apply these Twitter uses to their own business.

I quickly highlighted and flagged my copy of Twitter Means Business. I want to use it as a reference which I will use repeatedly until the lessons in this book become second nature to my own business use of this valuable tool. The one missing piece in Twitter Means Business is a thorough index but this lack can be filled in with a later edition of the title. I highly recommend this book to anyone who is looking to open new opportunities for their business through Twitter.

If you have been resisting Twitter and the importance of it, stop for a moment and think about your writing. Does it fall into a particular theme or topic? Like any aspect of marketing or promotion, your use of Twitter will involve consistency and focus. These microblogs are just like a regular blog. With each entry keep your overall purpose in mind--and the audience for that purpose. It will help you attract the right sort of "followers" to your tweets.

The predominate theme in the news media is often dark and discouraging. Don't let that news drive your decisions and your own attitude about what is ahead. Refuse to let that information pull down your spirit and focus. While financial success from Twitter isn't everything, it can happen as Julio Ojeda-Zapata points out in Twitter Means Business. One of the companies discussed in this book is Dell Computers. While it is a small percentage of their overall business, earlier this year, Dell reported their "Twitter activity accounted for more than $500,000--not bad for a bunch of tweets.: (page 36)

If you have any hang-ups with the name Twitter, get over it and move past it.

LOVE IT! There is SO much more to Twitter than meets the eye and when people take the time to see the BIG PICTURE impact something like Twitter can have we can all grab ahold of something right as it skyrockets!

Thanks for the insight and the book tips!

I love Twitter! It's been a great way to increase traffic to my blog. I've asked questions and received many responses. One night when I couldn't sleep, I checked in with fellow tweeters and got advice to get back to sleep. It was very cute!

The search twitter function helps me to write HOT TOPIC blog posts for my "work blog" at http://www.quickcomments.com/blog.
I appreciate the recommendation on this book and will check it out for sure. Thanks!

I think *twitter* is a fun name! I asked someone at work the other day if he twittered and I think he thought to have me commited to the loony farm. It was pretty funny.