Throughout this week, I've been writing about some of my experiences in New York City for the American Society of Journalists and Authors meetings. If you have never been to one of these sessions, I highly recommend that you do it at least once. There are many benefits for being a part of this organization. The Friday sessions are just for ASJA members. Unlike many other writers organizations, to get into the ASJA, you have to qualify for membership which raises the level of professional for the group as well as the meaning of membership within the publishing community. Over the years, I have consistently cherished my friendships within this organization and learned so much from different members.

For the last several years, one of the benefits of the Members Only meeting is a session called Personal Pitch. A large number of magazine editors, book editors and literary agents come to these sessions which are Speed Pitch Sessions lasting about nine minutes. Because the conference is based in New York City, many major publications have editors who are a short distance from the hotel. They can easily attend these pitch sessions for a few hours and hopefully receive some great new professional connections. While some editors come year after year, there are often many different editors at each one of these sessions. Members can sign up ahead of time for their pitch sessions and they are run very regimented.

You can feel the tension outside the room as writers line up and are mentally rehearsing their pitches and looking over their notes. Nine minutes is not much time so the key will be to ask some pointed questions, swap business cards and get right to it. In years past, they have had these sessions in smaller rooms within the Grand Hyatt. 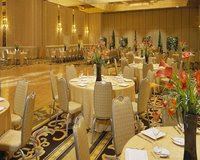 This year the pitch sessions were inside the Empire State Ballroom with lots of room. The numbered the tables and spread the editors around the room with space between them. It allowed you to talk quietly to the editor and not feel as if you were too close to another session. I met with four book editors and a magazine editor. I made some great new connections and I'm excited about the future potential with these relationships.

As any pitch session--even the longer ones at other conferences--the key will be in the follow-up. With the follow-up proposal or query letter, the editor can make a solid decision in their office or run it past any colleagues for input. I would not have formed these new relationships if I had not been in these sessions at this particular conference. There are many great conferences in different areas. What are you doing to invest in your own writing career? I hope you have plans to attend one of these conferences. Whether it is something you learn from another participant or one of the faculty members, it could take your writing life in a completely different direction.