On Monday I began to tell you about some of my experiences in New York City. At the end of that entry, I mentioned some unique entertainment that I squeezed into my time in the city. After the full day of meetings and moving around the city last Wednesday, I debated about taking the time and expense to go to a Broadway play. I love the theater and New York is a special place to see plays.

Because I finished my series of meetings just off 42nd Street, I walked over to the TKTS booth where you can purchase half-price tickets to Broadway shows. I arrived about 5 p.m. and found great variety and mid-week tends to be a good time to go. It was my only free evening. When I looked over the possibilities, I spotted a musical which launched in October 2006, Mary Poppins. I purchased a ticket for the mezzanine on the third row 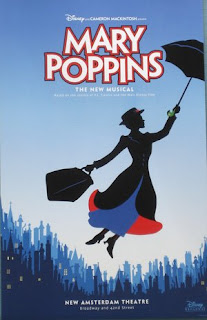 Just to give you an idea, at one point in the play, the character of Bert dances over to the curtain and "walks" up the curtain then tap dances in the middle of the stage upside down. I'm serious. At another point in the production, Mary Poppins opens her umbrella and lifts over the audience up to the third balcony. Yes, she flew right over my head and I was spellbound.

The music from the play was catchy but one tune stood out for me called Anything Can Happen. Here's a bit of the lyrics (or you can follow that link to see all of them):

You get the stars thrown in

Anything can happen if you let it Life is out there waiting so go and get it Grab it by the collar, seize it by the scruff Once you've started living life you just can't get enough." 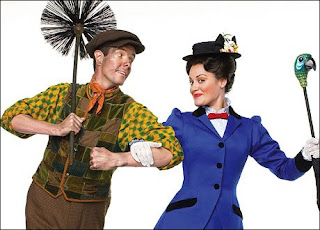 The evening was magical for me and a solid boost of encouragement. In the writing world, it's fairly easy to focus on the rejection and the lack of response from editors and literary agents. Yes in some circles things are tighter and publishers are making fewer choices and looking for authors that can propel their publishing house to a new level of success. My encouragement for you today is to take these words from Mary Poppins and let it propel you to action with your writing, "Anything can happen if you let it, life is out there waiting so go and get it."

Thanks for yet another great blog!

Yes, anything can happen --

Thanks for sharing about one very magical evening! Love those lyrics...

That's what I love about the writing life. There are so many pleasant possibilities out there just waiting to happen.

Glad you enjoyed the show. Sounds like it was fantastic!

The New Amsterdam is my favorite theatre on Broadway!

I saw the play early last year and i just loved the music. It takes me back to the original days. And like you said the special effects are very cool!

Just the encouragement I needed! Thanks.

Any time someone mentions something as wonderful and "uplifting" as "Mary Poppins" and her umbrella, my ears perk up! That was such a buoyant post, Terry! Glad you got to enjoy it and thanks for the "pick-me-up" :)