Back From The Big Apple

Mid-day on Sunday, I returned from five days in New York City. Whenever I travel to New York City, it seems to be a whirlwind of activity. I met with various editors and pitched projects for clients of Whalin Literary Agency. I talked shop with my colleagues in the American Society of Journalists and Authors. I met many new people and exchanged business cards and many other details. 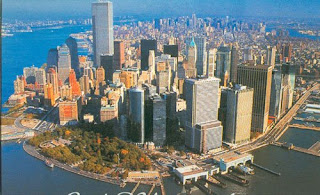 Over the next couple of entries about The Writing Life, I'm going to break out some of those events and write about them here so you can get a hint of what transpired, what I learned from it--and you can learn as well. The majority of people who attended the conference from out of town stayed at the Grand Hyatt which was the conference hotel. It's a terrific place located right next to Grand Central Station yet typical for a New York hotel right in the center of town, not inexpensive.

With the advice from an ASJA colleague, several weeks ago I checked out temporary housing on CraigsList and found a one-bedroom apartment for less than half of the conference hotel rate. It was a terrific arrangement because I could cook my own breakfast and had a bit more space than your typical New York hotel room. It would have helped me to have one extra detail from my colleague: to look for buildings with an elevator. This one bedroom apartment was on the fifth floor with no elevator. It took quite a bit of personal heavy lifting to get my belongings up to that fifth floor with a narrow staircase on each floor. Then yesterday heading home, it involved some careful walking again with my suitcases to get down from the apartment. Because I was on the upper west side and at least 50 city blocks from the hotel, I rode the New York subway each direction.

Just to give you an idea about my diversity of transportation, I took my last subway ride to the apartment late Saturday night, packed up and checked out about 5:30 a.m. I flagged down a taxi who took me to the New York Port Authority. I rode a bus from the Newark Airport when I arrived to the Port Authority and now I was making this trip in reverse. The bus runs about every 15 minutes from Manhattan to the airport. I reached the airport and checked my luggage and purchased a bit of breakfast. My 4.5 hour flight from Newark to Phoenix was uneventful. I waited in the Phoenix airport baggage claim area until the last bag came off--and none of them included my bags. So...I went to the airline to report my missing bags. To my relief the airline worker found my two bags. Apparently I checked in so early in Newark, they put my bags on a previous flight. I took the airport shuttle to the economy parking, found my car and drove home. It made for a long day of travel.

Saturday I was a panelist at a workshop about blogging. Here's what the program said about our session and the various panelists:

If you're thinking of creating a blog or looking to improve your current template, this is a must-attend session. Panelists will show how to achieve professional results when it comes to generating buzz, cultivating an audience, and writing the kind of content that gets you noticed by editors. Bonus: the latest tech details.

Bruce E. Mowday, President of The Mowday Group, Inc., spent more than 20 years in journalism, winning a number of writing awards for investigative journalism, before founding his own company in 1997. Mowday's complete endeavors are found at Mowday.com. Bruce is a contributing editor for a business magazine and freelances stories for newspapers, historical organization newsletters and other publications. He has also hosted his own weekly radio show on two stations. Mowday is the author of eight published books, including The Selling of an Author, a marketing guide for authors.

Jerame Rief, owner of DataOne Solutions, Inc., a technology consulting firm specializing in building web-based solutions as they relate to the needs of writers, entrepreneurs and building business platforms.

Patrick Stiegman, is vice president and executive editor/producer for ESPN.com. Stiegman, who joined the award-winning site in April 2004, oversees ESPN.com's day-to-day public and premium sports content, including news, commentary, analysis, enterprise and community. His role includes collaborative strategic planning and content development across ESPN Digital Media. He has editorial oversight of the award-winning premium service, ESPN Insider, with additional strategic responsibilities for numerous business objectives. He was named vice president in November 2006 and added the title of executive producer in June 2007. Before joining ESPN, Stiegman spent five years as vice president/editor of Journal Interactive, the award-winning Internet division of the Milwaukee Journal Sentinel, where he was responsible for editorial, business and strategic development of Journal Communication's new media initiatives.

W. Terry Whalin, ASJA board member, writer and literary agent, is an active blogger who is always updating his expertise on retaining an audience. He is the author of numerous books."

Moderator T.C. Cameron included some information about the panel on his blog along with some powerpoints from it at this link. Here's my handout that I created for this session. Notice my first link on this page. It's for a free Ebook about blogging. I hope it will be a useful resource for you as well. Our session about blogging was packed with hardly an empty seat in the room.

Over the next few days, I plan to tell you about some of my meetings at publishing houses across New York City, some of the free ideas that I found in the ASJA conference Idea Marketplace plus a bit of extra entertainment that I took in while there. As a hint, I will tell you that New York is one of the few place in the world to experience such clean family entertainment. I promise to tie each detail to the world of writing and publishing.

Finally, not that anyone is keeping track, this entry marks my 800th post about The Writing Life. Make sure you use the wealth of information here and the search tool in the right-hand column of the site.

Congrats on your milestone!! Very exciting! I look forward to hearing about your big city adventures!

Congratulations on no. 800, Terry! Your considerable time and talent creating your great newsletters is the best info I receive in a most complicated business.

Terrific hand-out, Terry! What a wealth of information on one sheet! I'm sure you were a great addition to the blogging panel. Looking forward to what you share in the days ahead.