A New York Times Bestseller From a Footnote 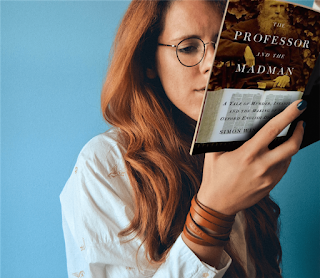 Throughout my years in publishing, I have read or heard many unusual publishing stories. Today I want to tell one of those stories to encourage you and show you how our world is full of opportunity for every writer. I was attending the American Society of Journalists and Authors annual conference in New York City and attended a workshop called “The Making of a Bestseller.” The purpose of the workshop was to pull back the curtain of how a bestseller happens. The various key players in the front of the room behind a series of tables and included the author, the editor, the literary agent and the publicist.
The author Simon Winchester had publshed a number of historical nonfiction books. Originally from the United Kingdom and now an American, Winchester told about he liked to read in the bathtub. One day he was reading a history book and in a footnote found an obscure reference to the greatest contributor to the making of the Oxford English Dictionary, which is the largest dictionary in the English language.
From the footnote, Winchester began to research and learned the greatest contributor to the dictionary never showed up in the meetings. Professor James Murray traveled to the Broadmoor Assylum to meet this contributor. To his surprise, he learned Dr. William Chester Minor was a lifetime inmate in the institution. He continued to receive a stipened as a retired Union officer and used these funds to purchase books. It's a remarkable story which became a New York Times bestseller and even a movie with Mel Gibson and Sean Penn as the lead actors. Here's the film trailer.
The book, The Professor and the Madman, A Tale ovf Murder, Insanity, and the Making of the Oxford English Dictionary, is one of my favorite books on my shelf. I encourage you to read the story whether you buy the book or get it from your library. I tell this story for several reasons:
1. Yes, over 4,500 new books are published every day. It is hard to find the right connection and many details have to come together to become a bestselling book. Even though it is hard, you should continue to try.
2. The story is one element but you must also learn to write a good pitch or book proposal. (Use this link to get your free copy.) As I've mentioned in these entries, you have seconds with your proposal to capture attention—yet it is still possible if you persist and get it to the right person. 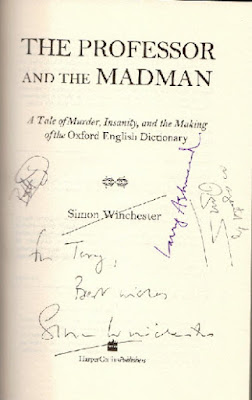 3. It will take persistence and continued work to find this right connection for your book. As the author, you believe in the work more than anyone else—more than your literary agent, publisher, editor or publicist. It takes a skilled team to achieve success like The Professor and The Madman. Above I include the page with various signatures on my signed copy.
I believe in a world of possibilities and hope this story has stirred that hope for you. Let me know in the comments below.
Tweetable:

It's an unusual publishing story from a prolific editor and author. The origin of a New York Times bestseller began when the author found a footnote. Publishing is filled with possibilities.  Get the details here. (ClickToTweet)

Does your fiction or nonfiction book have a business plan? Every type of book needs a proposal—even if you self-publish. Get this resource.