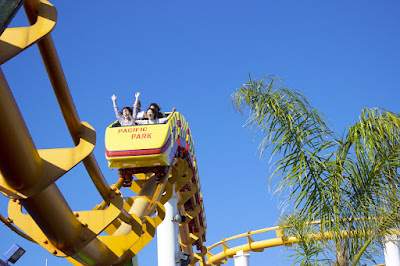 Our life as writers is filled with highs and lows. When our work gets published, it's a high. Maybe it is a magazine article or a chapter in an anthology or your first book or ____ book. When each of these pieces get into the world, it makes you feel good.
Then there are the lows when you get a negative royalty statement. If you've never heard this term, it's where you received an advance from your publisher but the book hasn't earned back or sold enough books to make any more money. You still get statements from the publisher but they are in the minus or negative category. Or you look at your reviews and see a one star review where someone threw your book into the subway trash can. I didn't make up that line but someone actually wrote that statement on an Amazon review about one of my successful books.
These highs and lows of the writing life can be compared to riding a rollercoaster. As you ride, the rollercoaster slowly climbs to the top but when you reach it, you know you are headed down on the other side. Every writer experiences these highs and lows as a part of our writing life—including me.
How do you ride through these highs and lows of the writing life? It's what I want to give you in this article. There are several key practices for every successful writer to practice. I'm not talking about practicing something once but building it into the fiber of your life and doing it over and over.
Persistence and Perserverance. As writers, we are told “no” a great deal—at least it happens in my life. Phone calls aren't returned. Contracts are not taken when offered. Projects get cancelled and many other things happen in the process of working with others. Yes, it hurts and is “not personal but business” along with other phrases people use to soften the blow. When you have this experience you can certainly quit and move away from the project. Or you can do what Jack Canfield and Mark Victor Hansen did as they were rejected 140 times for the Chicken Soup for the Soul proposal. They looked at each other and said, “Next.” See the hope built into that word? The current project wasn't a fit for you but you are turning and looking for the next one. Your persistence and perserverance is what will count to eventually make it happen.
Consistency.  Since July, 2008, I've posted on Twitter over 68,000 times. Yes, that is a lot of posts. If you look at my Twitter Feed, I post about 12–15 times a day in a consistent pattern.  At times, I wonder if anyone is reading these posts or cares. In April, I met a high-profile author and the first thing he told me is that he reads my Twitter posts. He applauded my consistency and how I stay on message with these posts.  I blog consistently and write these new entries every week. These are just two examples of my consistent actions. What steps are you taking consistently. Are you meeting new people through LinkedIN or Facebook, then helping those people? Are you pitching new editors or podcast hosts or radio programs or something else you want to do? Your consistency will pay off in the long haul. Nothing is immediate in this business. As Jerry B. Jenkins wrote in the Foreword of my 10 Publishing Myths: Left Behind was his 125th  published book. He was not an overnight success but has consistently worked at his craft and presence in the publishing world. Left Behind was originally published over 20 years ago and continues to sell at least 10,000 copies each month and the series has sold over 60 million books. Consistency is an important quality.
Continued Improvement and Growth. I've never claimed to be the best writer in the room but I am one of the more persistent and consistent writers. Another key to this writing life rollercoaster is continuing to grow and improve as a writer. I love what Darren Hardy encourages in his Darren Daily. He has created the hashtag #BetterEveryDay. It's why I continue to read books on the craft of writing, take online courses and learn from others. It's a key part of my writing life—and hopefully your life as well.
Knocking on New Doors. I've gotten wound up on this article so I'm going to bring it to a conclusion. Be meeting new people and pitching new projects in new places. The opportunities are there but you have to be knocking on the doors.
I've given you some important characteristics for the writing life rollercoaster. Let me know what you think in the comments below.
Tweetable: 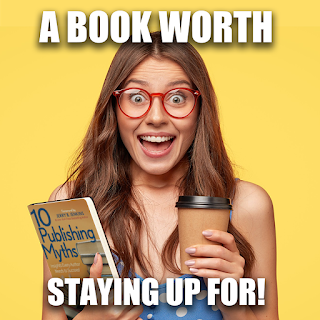