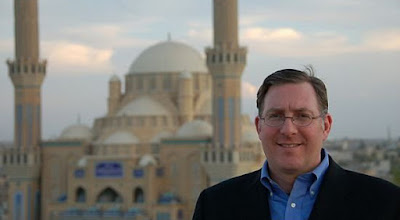 For many years, I've admired and read the books from New York Times bestselling author Joel C. Rosenberg. We follow each other on Twitter and have exchanged emails. I've reviewed and promoted his books but never met face to face. His parents live nearby and attend Calvary Chapel South Denver. When Joel's father retired after four decades as an architect, they created Ministry Architecture. I learned about their annual fund raiser at their church, bought a ticket and attended the event. As a writer, be aware of these types of events (which may be in your city) then make plans and attend them. In my local Denver Post newspaper, the Tattered Cover announces author events each week in the Sunday newspaper. Attending these types of events can give you some unique opportunities—if you are aware and seize them.

His first novel was The Last Jihad (Forge Books) published in 2003. This political thriller was a page turner with an opening that I still recall 15 years after reading it (yes that good and memorable). The book caught on and reached the New York Times bestseller list. A committed Christian, Rosenberg moved this book and his future books to Tyndale House Publishers.He has written several nonfiction books but the majority of his books are fast-paced political thrillers.

Rosenberg spoke to a packed crowd for over two hours. The majority of his talk was about flash points and current geo-political events where he has first hand knowledge. I found it educational and fascinating. Woven into his speaking were several keys for writers that I want to emphasize in this article.

1. Joel C. Rosenberg is a brilliant storyteller and writer. I suspect some of it is his natural ability but other skills he learned and perfected. Every writer needs to learn how to spin a solid story whether in print or orally.

2. As a writer, Joel Rosenberg is plugged into the world geo-politics, traveling and meeting with world leaders. He mentioned meeting with the President of Egypt, the U.S. Secretary of State and other officials—and these meetings were recent with a current and fresh perspective. Formerly he lived in Washington, D.C. and now he lives in Israel. His lifestyle plays into his writing. If you want to know more details and keep up on Rosenberg's insights, one of the ways he suggested was subscribing to his blog updates (follow this link).

3. He pours his personal insights about the world into his novels. He talked about writing chapters that were like eating Pringles. He dares his readers to just read one chapter without continuing to the next chapter. The ongoing action and short chapters compel readers to keep going. Rosenberg told about getting regular emails from readers who have stayed up all night reading his novels. Now that is amazing storytelling and something each of us should aspire with our writing. Are you making your book chapters to be consumed like Pringles?

Each of us can be learning and growing from our world around us. I encourage you to take action in this area in the days ahead.

When a bestselling author comes near you, do you attend the event and what do you learn or gain? Let me know in the comments below.

What does a prolific author learn from meeting a bestselling author? Learn the details here. (ClickToTweet)