The Continual Need for Any Author

I often hear this refrain from authors. "I don't like to market." Or "I'm an introvert and don't like to speak in public." Or this one, "I'm a writer and not a marketing person. I'm going to spend my time in the craft of writing." Now don't get me wrong, it's important to learn the craft of writing and I encourage such action often in these entries on the writing life. Yet it is also important to learn the skill of promotion and marketing. It's a huge pain--and I feel that pain personally--yet I understand the realities of the marketplace.

As an acquisitions editor and now a literary agent, I've listened to authors complain about their lack of book sales or their book going out of print. While I understand there are many reasons for lack of sales and the book going out of print, much of it relates to whether the book is selling or not. As I've said many times in these entries, it is the author who has the greatest passion for their topic. It is the author who lives, breathes and sleeps with the topic. So the author is the one who needs to continue to carry that passion ahead and continually do something proactive to get the word out on their book.

Almost every day I try to do something proactive to tell people about Book Proposals That Sell. Yes, this book has been in the market for over two years but it continues to consistently sell either in the ebook format or through Amazon and other places. How do I know it is selling? It's not an accurate barometer but I notice my Amazon sales numbers. They have consistently been between 5,000 and 30,000 throughout the two years. What does that mean? It means that every week this book continues to sell copies. Your first step is to write an excellent book that helps people but the second key is to continue to talk with people about that book.

I make no claims to do this promotion and marketing perfectly but I am consistent. Yesterday I was talking with a long-term editor friend who I had not called in years. when she answered her phone, it turned out she is living in the mid-part of the United States and working remote for the publisher--and has been doing it for two years. Now I've known this editor for many years so we connected right away. She and I had lost touch and I told her about my Book Proposals That Sell. When she said she'd look it up on Amazon, I offered to send her a copy--then I put it in the mail yesterday. Will I see an immediate return on that action? I don't know but I do know she's an active member of the publishing community and I want her to know about my book and recommend it to people. It was a simple act that I took to continue to let people know about this product. You can follow my example with your book. The world is small and inter-connected. 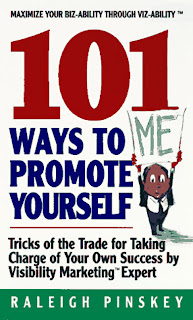 Let me give you a couple of resources in this area of promotion. I was listening to Arielle Ford and her Everything You Should Know package in my car yesterday. If you don't know what I'm talking about, follow the link and check out the short video that Arielle put together. It's informative.

I was listening to Arielle interview Raleigh Pinskey, author of the book, 101 Ways to Promote Yourself. Now I had never heard of Raleigh Pinskey but I was fascinated to hear her talk about her own shyness (common among many of us) and yet how she continually promoted this book with a copyright date of 1999. I have no idea when this interview was recorded but some time in the last couple of years. Pinskey noted that her book continues to sell about 250 copies each month and had total sales at the time of over 10,000 copies. Now 250 copies a month may not sound huge to you but that translates into about 3,000 copies a year--which is respectable in many publishing circles--especially for a backlist title.

"Something" about the title of this book, 101 Ways to Promote Yourself, sounded familiar. It turns out I've had the book on my shelf for at least six months (maybe longer) and had never opened it. I read the entire book last night. I love the classic marketing quote from P.T. Barnum in the Foreword, "Without promotion something terrible happens--nothing!" This quote captures the truth of many authors. They want the world to come to their door and when it does not, they don't understand. It's like Pinskey says, you can build the world's best mouse trap (or the world's greatest book) but if no one knows about it, then you have a garage (or basement or storage area), filled with great mouse traps (or books). I added my review of this book to Amazon then I noticed Raleigh Pinsky's address in the right-hand column. We probably live within a few miles of each other.

In summary, here's the lesson for your writing life: make a choice as an author or writer to continually promote and market your book or yourself or both. It may not pay off immediately but in the long run, I predict you will reap unexpected and potentially huge results.

You're spot-on here, Terry. I used to think the exact same thing as a writer when first starting out, that it wasn't my job. Then I read about the statistics of books (how many hit the marketplace yearly, how soon they go out of print, etc.) and realized how important it was. Editors and agents also appreciate any author who demonstrates his or her willingess and knowledge in marketing. After all, it's not often the title that sells a book as much as whose name's on the cover!

Thanks again, for inspiring me. I am constantly marketing and promoting my own books since my publisher doesn't. It gets to the point of wanting to throw your hands up in the air and want to give up. When I read articles like yours, I can take a deep breath, and begin again. I bookmarked your blog months ago, but now I'm adding a link to my own blogs.