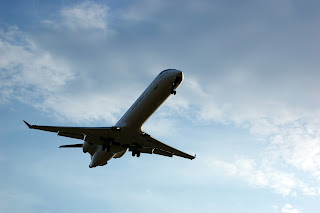 If you don't travel much, some people believe it is all fun and games to go to different events. I'm glad for the opportunities and seem to end up on the road at least once a month. It seems like recently my trips are back to back where I'm home for a day or two, then back out again. If you want to keep up on my travel schedule, here is where I keep this information. I do hope our paths cross on one of my forthcoming trips and we can connect about your writing and how I can help you.
During a recent Saturday night trip, I checked my return flight home on Sunday and internally groaned. It left at 6:55 a.m. My ride to the airport would meet me in the lobby at 5:15 a.m. Calculating I needed 45 minutes to check out of my room, I called the front desk and asked for a 4:30 wake-up call.
“In the morning?” the operator asked.
“Yes,” I affirmed with reluctance.
It amounted to a short night. At that time of the morning, I expected the hotel lobby to be empty. When the elevator door opened on the first floor, people were everywhere. Young men and women gathered in little groups with animated talking, launching and some of them were carrying beers. I looked at my watch and it affirmed that it was 5:05 a.m. What was going on?
I spotted a young woman alone to inquire what was going on.
“It’s our annual marching competition and we come to this hotel every year,” she explained.
When a car pulled into the front of the hotel, she said, “That’s got to be for you since no one else will need a ride to the airport.” She motioned to her student colleagues who continued in their animated conversation.
Thanking her, I began to pull my bags to the curb. Yes, my ride was there and I headed to the airport.
Cross country travel is an adventure you have to be prepared for anything to happen.
While I had an unusual experience on the way home, I also had a unique experience on the way out to begin my trip. I changed planes in Charlotte, North Carolina which is often a very busy airport. That day was no exception.
I slipped into the restroom. To my shock when I zipped my pants, the zipper mechanism fell into my hand. Now what?
I had no change of clothing because the airline was handling my suitcase. There is nothing to be done. My zipper would remain broken. In years past before September 2001 and the security measures, you could travel with a safety pin in your bag but those days are gone. Safety pins are considered dangerous.
My only option was to pull the front of my pants tightly under my belt and walk quickly through the crowd to my next gate.
I checked the monitor and had arrived on concourse B in Charlotte. My commuter plane to my final destination was at the opposite end of the airport which meant quite a hike passing thousands of people. Terrific I thought. Oh, the joys of traveling.
I attempted to be casual about it and hiked to my next gate. The fight crew had not arrived so they left about 30 minutes late and I got to stand around—careful standing. I got on the plane which involved careful sitting. The blankets would have helped my situation but the airline gave up having those blankets years ago.
My bags arrived at my destination, I pulled them to the curb and my ride hauled me to the hotel. No one said anything about my zipper and I ignore it. What a way to begin this trip. The fun was just beginning.

Once the only flight I could get left at 5:30 AM. It was an international flight, so I had to arrive 2 hours early. The hotel was 90 minutes away in good weather, but there was a snow storm. So, I took an early evening nap and checked out at 11:30 PM. Yes, traveling is so much fun!