The Power of a Changed Life 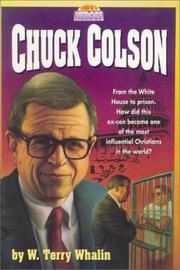 Most of us are set in our ways and it is hard for us to change. Yet throughout life we make changes. We move in a different direction with our life or any number of important shifts. One of the most pointed examples of a changed life in my view comes from one of my biographies, Chuck Colson. Last weekend I learned Chuck passed away at 80 years old.

Known as President Richard Nixon's hatchet man, Chuck Colson, went to prison for his involvement in Watergate. He discovered a relationship with Jesus Christ which changed the direction of his life. Chuck founded a world-wide ministry to prisons called Prison Fellowship. It was my honor to write a youth book about Chuck's life as a part of the Today's Heroes series (Zondervan). The book was published in 1994 and shows a different side of Colson's life and personality.

As I wrote Colson's story, almost every person wanted to tell me a funny story about his life. From his early years, Colson loved a good practical joke. Some of them involved serious effort to successfully pull off. I included some of these stories in my biography.

Throughout the experience, Chuck carefully read every word of the book and gave feedback on the details. He questioned the inclusion of his first marriage and the divorce. I talked it over with my editor who responded, “Many of the young readers of this series will have their own divorce experiences. It's a part of Colson's life and should be included.” Chuck agreed and those few paragraphs remained in my book.

A short time after the book released, I was invited to appear at the Kentucky Book Fair. I had not published many books and Chuck Colson was one of my few books that I brought to this event. At this point in Chuck's life, he was traveling and speaking constantly about his changed life. He had appeared at Billy Graham Crusades and many other high profile events telling about his transformation. To my surprise, the skeptics remained. A number of people told me, “I can't buy your book because I don't believe Chuck Colson changed.”

If you haven't read the story of Chuck's changed life, I recommend you do so. I have some of the few remaining copies of this book in print and have set up a special link so you can get it.

Our loss of Chuck's presence among us is heaven's gain. We mourn his passing but celebrate the tremendous legacy and wealth of teaching and books which remain in our culture. While I had not spoken to Chuck in many years, it is one of the great blessings of my life to call him a friend and to have written the story of his life.