Insights about Writers from the Movies 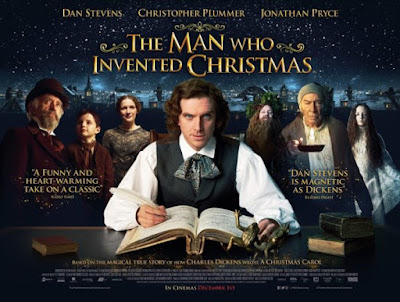 Unless you study my tweets on a regular basis, you probably don't know that I love going to movies. In fact, if I'm in town, we often go almost every week to some film. If the movie is worth it, after I get home, I will often send a tweet about the movie and a rating. Just like every book, not every movie is worth telling you about so if it is a dud then I say nothing about it.


Last weekend, we saw The Man Who Invented Christmas which is currently in the theaters. If you haven't caught this film, I recommend you get there. Why? Because this film captures something unusual about the life of a writer and the writing process. The movie is set in 19th  century England and tells the story behind the writing of the Charles Dickens' classic novel, A Christmas Carol. While over 50 movies have been made from the novel, this film captures something different. It is focused on the behind-the-scenes elements of how Dickens wrote the book. Yet like any good piece of fiction, the film still takes creative license with the historical facts.

The acting from Dan Stevens as Charles Dickens and Christopher Plummer as Scrooge is well-done and the story is a fun film. My reason for telling you about this movie is how it portrays the writing process and the pain that a writer must go through to create his work. The interaction with family members and how Dickens had to face personal nightmares from his own past to complete the work on deadline mirrors things that I've experienced in my own writing life.

The epilogue of the movie said A Christmas Carol was released in bookstores on December 19, 1843. Every copy of the book was sold by Christmas Eve on December 24th. Also charitable giving throughout London dramatically increased that Christmas season. Dickens wrote this book in a short amount of time but it has become a Christmas classic about our need to be generous and celebrate life.

This movie is one for the entire family yet it shows something important about the writing process.

Tell me if you go to movies and how this experience feeds into your writing. Tell me in the comments below.

What can you learn about writing through going to movies? Get some insights here.  (ClickToTweet)

When I started my publishing writing career, the movie that influenced me was "Julie and Julia." I love movies about writers. "Finding Neverland," "Saving Mr. Banks" are some recent ones.
I look forward to seeing this one. And the one about Christopher Robin. I'm an old writer at heart. "Little Women" is a classic, too.

Mollie, Thank you for this comment and the affirmation about how we as writers can learn from watching movies. I loved all the films you mentioned and have seen them and gained inspiration from them. Terry

I haven't seen "The Man Who Invented Christmas" yet, but I cried when I watched the preview. I must be a writer. :)

Rachael, you have a great point and must be a writer. Thanks for the comment. Terry