More Than A Memoir

The writing community has been stirred and drawn to "memoirs." It's given writers great hope they can find a traditional publisher for their personal story. Such hope is filled with danger because many of those personal stories don't have the national pull to become a bestseller. The majority of them are rejected almost immediately and if they appear in print, they are magazine articles. To all of these "regular practices" and "unwritten rules" within the publishing community, there are exceptions. I wanted to tell you about one of these exceptions and why you should rush out to read: If I Am Missing Or Dead, A Sister's Story of Love, Murder, and Liberation.

Behind the scenes, I've been gently cheering for this book and I’m glad to be able to tell you about it here--and other places such as my Amazon review. Janine Latus is a long-time friend and fellow member of the American Society of Journalists and Authors. From a distance, I've watched her hone her writing craft in many mainstream magazines and excellent journalistic writing. In October 2005, O magazine ran an intense personal story called "All The Wrong Men." Janine's article was selected as an award winner at the ASJA 2006 conference. This article was the springboard for Janine's book proposal for her first book. The proposal set off an intense bidding war which Simon and Schuster eventually won.

Janine wrote the book at a nearby coffee shop. In my view, the writing process of telling such a personal story must have been difficult and draining. The process of reliving the experiences captured in this book must have been tough. For a first-time author, I was interested to learn S & S printed 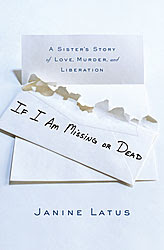 over 120,000 copies, which indicates their expectations for this book. Publisher's Weekly gave the book a starred review (scroll down to see it from this link). Other reviews have appeared in People and Entertainment Weekly. If you go to Starbucks (I'll admit not to being a frequent customer), then I understand If I Am Missing is selling a flash drive with the first chapter of the book and part of the money goes to Amy's Courage Fund. The book is a tool to spur the movement against domestic violence. It is much more than a moving memoir. If you get the book, you should know besides being riveting, it does include some graphic language. Because I don't typically read or write these types of books, I just wanted you to be aware of what's inside the pages and not be shocked at my recommendation. It's true to life so the material is included. After reading the book, my admiration for Janine has grown. Her desire is for the book to be an integral part of a movement against domestic violence. I celebrate the creation of things like Amy's Courage Fund as a means to help women who are trapped escape these abusive relationships.

I will probably write more about If I Am Missing Or Dead in the future. For now, celebrate this new book and go to your favorite bookseller and pick up a copy.

Yet another book I've added to my Amazon "wish list." :) Thanks, Terry.

Good for your friend. Journalists and professors have "marketing platforms" with some validity.

What's terribly unfortunate today is that trade publishers are simply no longer willing to take chances on writing by people who don't already have some visibility or a preexisting audience - however good the writing and however well qualified the author. Conversely, there's a glut of celebrities and business people, major and minor, and often their sons, daughters, and wives, with books on the shelves at Barnes and Noble that are sorely lacking in quality.

As Literary Market Place states: "If you are submitting a nonfiction book proposal without a marketing platform you are wasting your time." And I hear it's become almost as bad with fiction.

120,000 copies for a first-time author -- wow! That must mean her publisher plans to put a lot into her marketing campaign.

Another fine example of why it's better for writers to hone our skills on magazine articles than to self-publish our life story.

I'm curious what kinds of magazine articles she wrote -- did they tie into the topic of her book? I'm sure she's going to be doing a lot of public speaking on this topic.

I agree with Paul, though. It seems easier to develop a platform when you already have a book to market -- or you're a celebrity in another area.

The key article which Janine wrote about her personal situation was the O magazine article. She's written for many different publications as you can learn if you check out her personal website. For the May 13th edition of the New York Times Bestseller List, If I Am Missing Or Dead is #27.