Have you ever had great anticipation for a new movie which is based on some book which you absolutely loved? Then when you watch the movie you are disappointed the movie didn't meet your expectations?  Or you felt the movie left out some of the key scenes in the book?

One of the most amusing situations in this area (at least time) was with the John Grisham best-seller The Runaway Jury.  The storyline for the book centered on the tobacco industry. In contrast, the movie centered on similar issues but was about gun control. I noticed many people walking out of The Runaway Jury movie saying, "That was a good film but I don't remember the book being about guns." They were right. It wasn't.  A small percentage of the content of any book can be captured in the film adaptation. The challenge for the book author or the screenwriter is the same: they have to tell a good story.

I confess that I don't understand this adaption process but I've located a great resource which is loaded with insight and background for the adaption process. Stephanie Harrison wrote Adaptations From Short Story to Big Screen, 35 Great Stories That Have Inspired Great Films.  I picked up a copy of this book from Harrison's literary agent, Farley Chase, when I was in New York City last month. I've been reading through this book and found it fascinating. Harrison emphasizes this process of turning the short story into a feature film and includes the short stories in this book from authors like Ernest Hemingway, Graham Greene, Joyce Carol Oates, John Cheever, William Faulkner and F. Scott Fitzgerald. 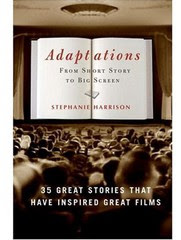 In her introduction Harrison says, "When stories (or authors) have entered into popular mythology, both critics and public alike resist their being tampered with. (Remember the beating director Roland Joffe and star Demi Moore took for their "free" adaptation of Nathaniel Hawthorne's The Scarlet Letter?--The script takes more liberties with the text than Elizabeth Berkley did with that pole in Showgirls,” complained USA Today). For this reason, films adapted from excellent but lesser-known tales have often been better received. Here, the short story has a distinct advantage over the novel; few short stories are embedded in the public's consciousness in the way that popular novels often are." Then a few pages later, Harrison circles back to The Scarlet Letter saying, "Somehow we need to teach ourselves how to approach adaptations fairly, as neither movie barbarians nor literary purists. A film shouldn't need to spring fully formed from a writer / director's loins in order to be deemed good. Nor should an adaptation be tethered too tightly to its source. (The Scarlet Letter didn't fail because it was unfaithful; it failed because it wasn't a very good film.) For artistic, financial and practical reasons--(there will always be a large percentage of people who never read the literary source)--films must succeed on their own terms. At the same time, though, they shouldn't replace the stories they're based on--though we, the reading public, have let this happen all too often. In the best cases, adaptations extend, enhance, and elaborate on their sources."

The key from my perspective is each form has to be grounded in excellent storytelling.

LOL...I bet you had a much quieter time in NY City than I did this weekend...LOL

I guess I understand that both films and books should stand on their own merits. But I usually go to see a movie adapted from a book...because it was adapted from the book.

It really annoys me and gets an automatic thumbs down if they've changed the story, particularly if the book is unrecognizable!