Each day for at least the last ten years, I reach for one book to begin my day, the Bible.  Before I read the local newspaper or anything else, the words have guided and inspired my life. This year I'm toward the end of The Daily Bible where author LaGard Smith has organized the Bible into chronological order. I’m making my fourth or fifth trip through this Bible and appreciate his devotional insights scattered throughout this book.  Since January 1 is a few weeks away, I've been planning which version I'll read in 2007. I'll be using The Daily Message which released earlier this year and I'm looking forward to this experience.

I wanted to make sure readers of these entries about The Writing Life got this advanced look at an article about Bibles in next week's The New Yorker magazine. It’s one of the publications that I read cover to cover and I haven't seen the printed article on this one--because it's not out in print until next week. Daniel Radosh wrote an article called The Good Book Business focused on Bible publishing.  Here's a short quote from the article to illustrate the size of this area of publishing, "The familiar observation that the Bible is the best-selling book of all time obscures a more startling fact: the Bible is the best-selling book of the year, every year. Calculating how many Bibles are so 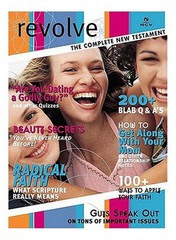 ld in the United States is a virtually impossible task, but a conservative estimate is that in 2005 Americans purchased some twenty-five million Bibles--twice as many as the most recent Harry Potter book. The amount spent annually on Bibles has been put at more than half a billion dollars."

I'm unsure why but I had a bit of trouble printing this New Yorker article. My printer cut off several letters in the right-hand column. I corrected this problem through creating a PDF of the article using the free version of program PDF995 then printing the PDF. If you too have this problem, then you can do the same thing.

Most of this article includes interviews with different people at Thomas Nelson Publishers, which is the second-largest publishers of Bibles. One of the Nelson programs which fascinates me and isn't included in The New Yorker article is their custom Bibles. In this program, any church or organization can personalize the Bible and use it for their needs. I was looking at this program several months ago and haven't noticed anything like it in the other Bible publishers.

The New Yorker article mentions Revolve, a BibleZine for the New Testament which released in 2003.  This book received a great deal of publicity when first released including a segment on the Today Show. Several years ago, I showed a New York literary agent a copy of Becoming and he was stunned. It looks like a contemporary magazine and nothing like his mental image of the Bible. He pronounced it as a brilliant marketing strategy and it has proven the case with the Bible sales. I was a contributor to one of these BibleZines called Align which is targeted to men.

Through the years, I've written material for a number of different Bible projects including The African American Devotional Bible (ghostwritten devotionals) and The Quest Study Bible (where I learned more about a ten chapter section of the book of Chronicles than I'll ever need to know).  The writer has great opportunities with these various Bible projects to contribute and write some of the specialized material which appears in each Bible. The opportunities to work on these projects isn't advertised but comes through personal networking and meeting various editors at writer's conferences or through your magazine writing. For example, part of the editorial staff at Christianity Today organized the various writers for The Quest Study Bible project. While I worked on this material many years ago, it continues to help people and I'm grateful for my involvement. There are many of these projects out there and you can find them as well if you keep at it.

I have enjoyed a chronilogically daily Bible, too. I love the variety of options that are available because it helps keep the most important book from growing stale. With all the versions and ways to read the Bible, I'm always learning something new.

You've covered two of my favorites!

I teach the Bible Study at church. We're using the Daily Bible, because I wanted to teach it in the order that it happened, especially with the prophets.

It really excites people to understand that prophets like Ezekiel and Jerimiah were prophecying at the same times.

F. LaGard has some good commentary, but not enough, so I also use the Quest Study Bible for more commentary flavor.

Both of those are in NIV. My personal bible is NKJV.

I've been reading the Daily Bible this year too, and have really enjoyed it. It gives you a whole different perspective reading the Bible chronologically.

As a former book retailer, I can tell you that the Bible is not just a bestseller, but it is also frequently stolen. The Bible was always way up close to the top of the list of items stolen from our stores. I never quite knew how to respond to that.

Thanks for this tip and the link to Amazon. I'm off to make a Christmas gift purchase -- perfect timing...