How Are You Asking?

A great deal of publishing involves the process of asking. For example, if you want to write a magazine article, then you learn how to write a one-page pitch letter called a query and send it to an editor. Essentially you are asking that editor to publish your article.

It's the same with books. You have a book proposal or a book manuscript and you ask the editor or agent to consider publishing your material. It's critical for each process that you ask in the right way to receive a positive response. I've invested a great deal in this teaching process creating courses and free teleseminars and articles.

As I consider this concept of asking, it is a biblical idea. James 4:2 says in the NIV, “You do not have because you do not ask God.” One of the keys is asking with the right strategy and in the right way.

Many times I speak with writers who are struggling financially. There has always been a “starving artist” type of mentality with writers. In recent years, some new tools are available (without cost) to help you raise the funds that you need to accomplish your dreams. Some people call it “crowd funding” and other times it is called “joyful giving.” It's a way your connections (friends and family) can financially support your publishing vision. 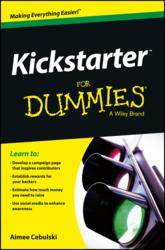 One of the most successful programs online is called Kickstarter. I read a new book from Aimee Cebulski called KICKSTARTER FOR DUMMIES. Whenever I want to learn a new skill, I’ve found it is important to learn from people who have detailed experience in this area. Aimee Cebulski is one of these people. She not only writes about Kickstarter but has used it successfully to fund her book, THE FINDING 40 PROJECT.

In the introduction for KICKSTARTER FOR DUMMIES, Cebulski writes “Kickstarter has quickly become a mainstream way to get a creative project made.” Most people have no idea how to raise funds for their creative project, Kickstarter gives anyone the ability to raise funds—but it does take strategic planning and thinking to pull off successfully. This book will help you understand the details and creative possibilities.

The Kickstarter model is working. Page 6 says, “As of March 2013, individuals using Kickstarter have:

“Kickstarter uses an all-or-nothing approach to fundraising. This means, if you don’t hit your fundraising goal within a certain timeframe (about 30 to 60 days), you get nothing. As a result, you need to be very strategic in your planning, your goal-setting, and backer solicitation, all of which I cover in depth in this book.” (Page 7)

The illustrations, step-by-step instructions and depth of this book make it a “must-have” for anyone who is going to use Kickstarter effectively. I recommend you get this book, study it carefully then launch your own creative endeavor. Aimee Cebulski has shown readers the path for their own success and opportunity with KICKSTARTER FOR DUMMIES.

Open your mind to new ideas and approaches. For some of you, Kickstarter will be a path you should explore to get the funds you need to publish your book or to market your book. The opportunity is certainly there for you. Will you seize it and ask others?