The Story Struck The Familiar 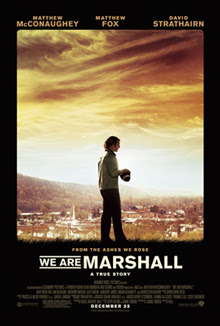 Several times a year, my wife and I take advantage of the "sneak previews" at our local movie theater.  If you've never been, these are movies which will release the next week or some times even two weeks from that viewing.   It's like reading the pre-release of a bestselling book so you can write something for a magazine. For those people who attend a sneak preview, you feel like you are on the inside track. Actually the theater folks are smart because they generate one of the most powerful mediums of advertising--word of mouth. I'm guilty because I'm going to tell you about a sneak preview we caught on Saturday night. The movie releases this week.  We watched We Are Marshall.

This movie is based on a true story when a chartered plane carrying 75 people including the Marshall University football team crashed into the side of a hill on November 14, 1970. It was less than a mile from the Huntington, West Virginia airport, Marshall's hometown and there were no survivors. The crash was the worst sports-related disaster in U.S. history. The story is one of hope about how they rebuilt the football team and the rise of the human spirit in the face of such a tragedy.

I loved the interaction between the characters in this film and how they struggled to recover and live in the present yet remember and celebrate their past.  Early on in th 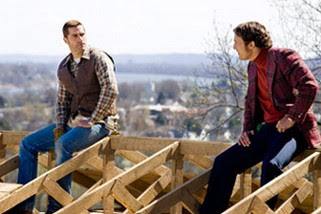 e story, Marshall's assistant coach doesn't fly on the plane but makes a recruiting trip on the way home. He quits his job and is building a shed in the back of his property. The new coach for the football team comes out to talk to the old assistant coach and try and convince him to come back to the team. This conversation happens on the roof of the shed. While the pair are talking, a train whistle sounds in the background and you can hear the rumbling of the freight train down the tracks. From the shed roof you can see the muddy Ohio River in the distance. This point in the film was only one of many that struck the familiar in my life. It will be different for every viewer but it sure hit home for me right there. Why? I was born in Huntington, West Virginia. My dad took some night classes at Marshall University. We lived across the Ohio River in a small town in Northeastern Kentucky for the first twelve years of my life. That scene from the movie was just like lifting a page from my memory banks about my childhood.

While every person who watches this film will have a different experience, the movie touches on universal themes. Each of us will have some tragedy touch our lives at some point. It may be tomorrow or it may be years away but it will happen. When you face tragedy, how to you handle it? Do you face it head on and rise to the challenge? We Are Marshall is a story filled with hope and the experience of life after death. If you want to read a moving story which emphasizes the truth from this movie, I recommend this story by Mike Morehouse on the Christianity Today site. Morehouse’s father, Gene Morehouse, was on the plane that crashed.

Whenever you tell a story, you face a challenge. Can your story hit such a familiar theme that it transports your readers to the setting of your story? They can feel it, taste it, smell it, hear it and see it. It's part of our joy as storytellers and the quest for excellence in learning our craft and practicing these skills.