A Celebration of Faithfulness

You will not find this book on any bestseller list.  Maybe it probably doesn't appear on any list at all. And that's OK. This week I received a copy of A Cup of Good Water by Francis Eachus and celebrated my chance to hold this printed book in my hand. Several years ago, Fran sent me her manuscript and asked if I knew how she could get it published. From the minute I glanced at the book, I knew it would be a challenge in today's marketplace. For over 50 years, Fran has worked among one of the largest groups of Mayan Indians in Guatemala, Central America—the K'ekchi'.  Yes, the name of the language includes apostrophes which are glottalized stops (the official linguistic term) and distinguish the language from Spanish. It sounds nothing like Spanish. 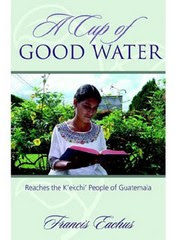 As a young girl in the 1950s, Fran combined forces with her partner, Ruth Carlson and began to work among the K'ekchi' people. In the late 70s and early 80s, I had the privilege to be one of Fran's and Ruth's colleagues who worked in Guatemala. These two women were quiet yet prolific. Most of us in Guatemala had the goal of giving the New Testament to a local language (one of more than 28 throughout Guatemala).

Over twenty years ago, I spent a couple of days with Fran and Ruth in their Coban home. In some ways it's a lifetime ago and in other ways I can picture it like yesterday. These women could switch from English to Spanish to K'ekchi' in a heartbeat and I found their skills remarkable. Their zeal for life and service to God was an amazing testimony to me—and continues to this day.

Back to A Cup of Good Water which is now in print.  I was honest with Fran and told her that it would be hard for a regular publisher to take such a book. I recommended she look into Print On Demand through Pleasant Word. This former colleague took my advice and followed through and now has a completed book. I have no idea how many copies of this book are in print but I suspect it's a relatively small number. I'm thrilled for this 79–year-old former colleague (her birth date is in the book). In July 1999, Fran's partner, Ruth Carlson, went to her eternal reward. Today Fran continues living among the K'ekchi' in Guatemala. Thousands of K'ekchi' Christians have come to faith and grown in their faith through the faithful effort of these courageous women. Because of their work, thousands of people learned to read and write in their own language. I celebrate their faithfulness.

Not every book will land on the bestseller list. Some books only have a few copies in print--and that's OK.

What a great testament to someone's life, and then to have it captured in print is very cool!